DeFox Records and Eur Records are proud to announce the digital version of VINICIO PERINOTTO's first album titled "Vinicio", produced in 2003 and printed privately in CD format.
The digital release will be available in February 25th on every worldwide webstores, iTunes, amazon, Spotify, Deezer, Google Music, Nokia, Emusic...
Vinicio Perinotto has been called a modern-day musical troubadour that bridges the separation of our language and culture with the love of music
Vinicio has always been a man of the arts.  His first love was photography, which he did professionally for 15 years.  He was quite successful in sharing the view of the world through his eyes.  It was his way of bringing people together.  Realizing his gift as something he could share, he was looking for new ways to affect people.  Naturally, what came to mind, was music.  He had always been drawn to music so Vinicio started as a DJ of a Rock & Roll radio show.  As in photography, he found a passion for music as well, which eventually led him to the stage.  Vinicio soon began to sing in his own Rock & Roll band.  He quickly became a much sought after successful front man on the scene. Vinicio then took a leap of faith to close his successful photography studio and decided to make music his full time career. He began performing solo shows with his incredible style of acoustic groove. As a solo artist, Vinicio was able to spread his wings and set his sights across borders.
As a traveling musician, he combined his two loves, travel and passion for music.  Soon he started performing across the globe.  In the last 15 years, Vinicio has brought his special style of performing to over twenty two countries on 3 different continents.  Throughout his travels he met and collaborated with many other artists and musicians.  Amongst them was a kindred spirit, an American musician, Richie Castro from Colorado.  Finding each other in Barcelona they quickly saw themselves in one another.  They shared many interests and would meet up across the world to share countless musical journeys. 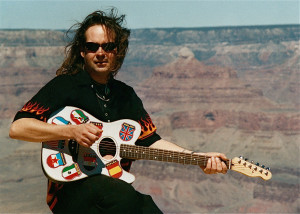 Wanting to share the fond memories of all the wonderful people he had met and beautiful places he had seen, Vinicio set forth to create his first CD.  His muse, being all of his experiences, Vinicio feverishly began converting his stories into lyrics.  For the production of the CD, he called on his longtime friend Richie Castro to assist with the recording, songwriting, and graphic arts.
The compilation of tracks carries us on his voyage.  In “Song for a Man” we are taken to the Croatian Islands where Vinicio meets a fellow musician full of life and innocence.
“How to Live” drives us along the endless highways of Southwestern United States creating a sense of self in all of the vastness of the open land.
Moving from track to track, Vinicio has drawn on his experiences and has become a musical raconteur and is now sharing his experiences with us.  There is such honesty in his songwriting you can almost feel what it is to travel the sands with the nomadic people of Africa or feel the romantic gestures of a Venezuelan beauty. Vinicio has woven the threads of his travels into a rich vibrant fabric he will use to envelope our hearts.  While listening to his songs it is clear, Vincio is a world class musician and storyteller.
The CD 'Vinicio' is a golden tribute to Vinicio Perinotto’s zeal for life, love, and passions!  It is his unique ability to create beautiful photographs in our minds using his musical and lyrical talents.
By Tammy Lucero and Richie Castro Denver
www.vinicioperinotto.com
http://eurrecords.nlz.it
http://dvlgator.nlz.it
Tags: artisti no limits, beatles, believe digital, blues, cinaotiko, country, crafter guitar, dv mark, dvl gator bureau, dvlgator, eur records, eurolivecafe, europe, kld amp, livejournal, padova, pink floyd, progressive metal, rock, travelling, treviso, uk, venezia
Subscribe